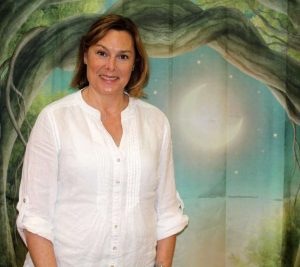 Jennifer Kenny, owner and director of Fairfield Performing Arts Studio stands in the First Church Congregational in Fairfield, where she teaches theatre classes to kids and adults.

FAIRFIELD — Life as a professional actor became less joyful for Fairfield resident Jennifer Kenny when her kids were young and nights of rehearsal kept her away from home.

Meanwhile, Kenny’s two children, now in their 20s, and her nieces and nephews developed an interest in theater, so she helped them prepare for auditions. After noticing her kin continuously got the roles for which they auditioned, Kenny realized theater instruction was her calling.

“I love to perform but I feel such a passion to help people achieve their goals,” 53-year-old Kenny said. Ten years ago, a friend of Kenny’s saw a job posting for an acting teacher and suggested Kenny apply for the job.

“I went to the interview, go the job on the spot, came home and I thought, this will be really fun but I don’t need to work for someone. I can do this myself,” Kenny said. Without giving it another thought, Kenny called First Church Congregational, where she is a parishioner, and asked if she could rent space to start a kids theater class.

The first class had five kids. Many of them, some now college freshmen, stayed with Kenny as the organization she founded, Fairfield Performing Arts Studio, grew to encompass two three-weeklong summer camps with 65 campers and 12 counselors.

Students in Kenny’s full-day camp learn voice, acting and dance skills and have the option to participate in arts and crafts and set-building. At the end of each session, Kenny’s students put on a musical at the Fairfield University Quick Center. This year’s performances will be “Annie” and “Willy Wonka.” Past camp shows include “Guys and Dolls,” “Lion King” and Shrek, among others.

Kenny has decades of acting and theater experience under her belt. Raised in North Haven and Branford, Kenny danced as a child and loved to sing. When she was 8, Kenny went with a neighbor to a Broadway performance of “Annie” with the original star, Andrea McArdle, and realized she could combine her two passions.

“I was so enthralled with her and the show that I said ‘This is what I have to do,’ ” Kenny said. After attending the Educational Center for the Arts, a performing arts high school in New Haven, Kenny earned a bachelor’s in fine arts in theater from the University of Connecticut, followed by a two-year conservatory program at Circle in the Square Theater School in New York City. Kenny appeared in soap operas and starred in roles ranging from Juliet in “Romeo and Juliet” to Adelaide in “Guys and Dolls.” She also spent time with an improv comedy troupe.

While living in the city, Kenny met her husband William, an environmental consultant. In 1994, the pair settled in Fairfield to raise their kids after living in Westport and Stamford.

“It felt a little less hectic,” Kenny said of Fairfield compared to nearby towns.

In addition to summer camps, Kenny teaches acting and performance classes for students throughout the school year, and instructs adults who need help with auditions or because they want to improve their public speaking skills.

Camp, however, is where Kenny’s heart is. “Sometimes when I talk about my camp, I cry,” Kenny said. “The first day of camp is the most amazing day of the year.”

Seeing all of her students gathered together with the counselors, many of them former campers, is powerful, Kenny said. “It’s definitely a family. We are very connected.”

Kenny fosters connection at camp by creating a phone-free and supportive space where kids can let go of their often stressful, overscheduled and social-media dominated lives. “We come here and we’re here to play, and to relax and to learn, but it’s all through play,” Kenny said.

Camp allows students who may not be interested in sports or video games to discover a passion, Kenny said. “It’s an opportunity to explore human nature, learn about yourself, and not have the pressure and to simply explore the craft of acting,” Kenny said.

In the end, acting and her camp are about instilling kids with life lessons, Kenny said.

“Kids need to feel empowered. They need to make friends. They need to know how to communicate without looking at the phone, how to work when they don’t get their way, how to deal with disappointment when you don’t get the part you want, how to work in a group, how to believe in yourself, how to congratulate other people when you feel they have done a good job, how to be a good listener, and enjoy yourself in whatever you do and commit yourself,” she said.